For this field trip, we journeyed over to the acidic limestone landscape of Hocking Hills.

The American Chestnut can be identified by its long ovular leaves with a pointed tip and serrated leaf margins. The leaves are alternately arranged. The American Chestnut is affected by a biotic pathogen (which I’ll talk about later) that is widespread and deeply affects the health of the tree. Due to poor health, most trees are reduced to small saplings attached to the large dead trunk of the previously healthy tree. 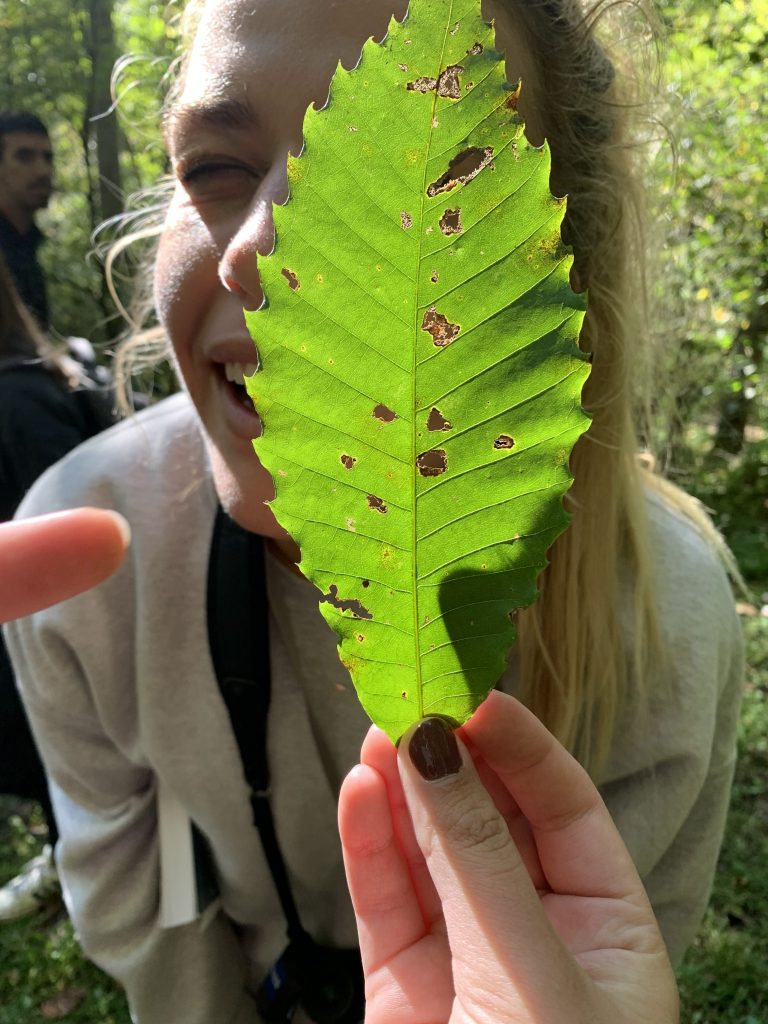 The American Chestnut leaf with classmate Faith behind it.

On the East Coast, the American Chestnut had many uses. The Cherokee and Mohegan peoples used the leaves to treat cold symptoms. The Cherokee also made use of year old leaves to treat heart issues. The Iroquois ground the wood into a fine powder to treat chafed skin of babies. More natural history information of the American Chestnut can be found here: https://nativeamericanmuseum.blogspot.com/2019/11/medincinal-monday-american-chestnut.html

The Eastern Hemlock can be identified as a hemlock by its flatly arranged single needles and small, fingernail sized cones that hang downward from the branches. When flipped over, there are two striking white stomata lines underneath the twigs. 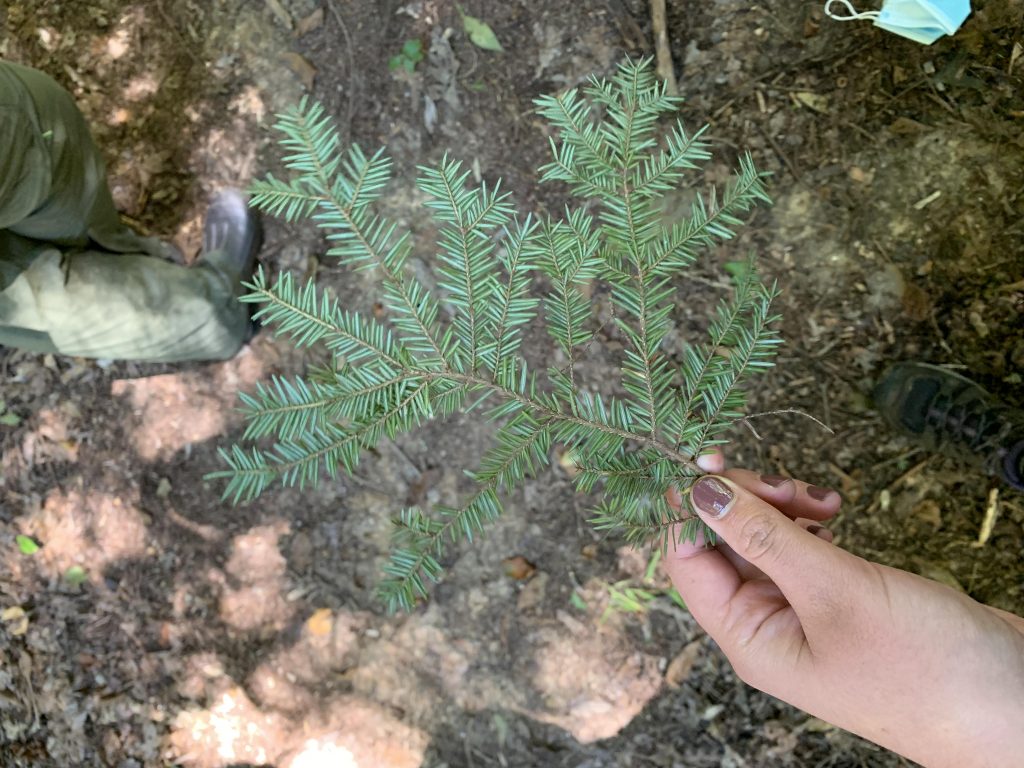 The back/under-side of the Eastern Hemlock needles. Note the white! 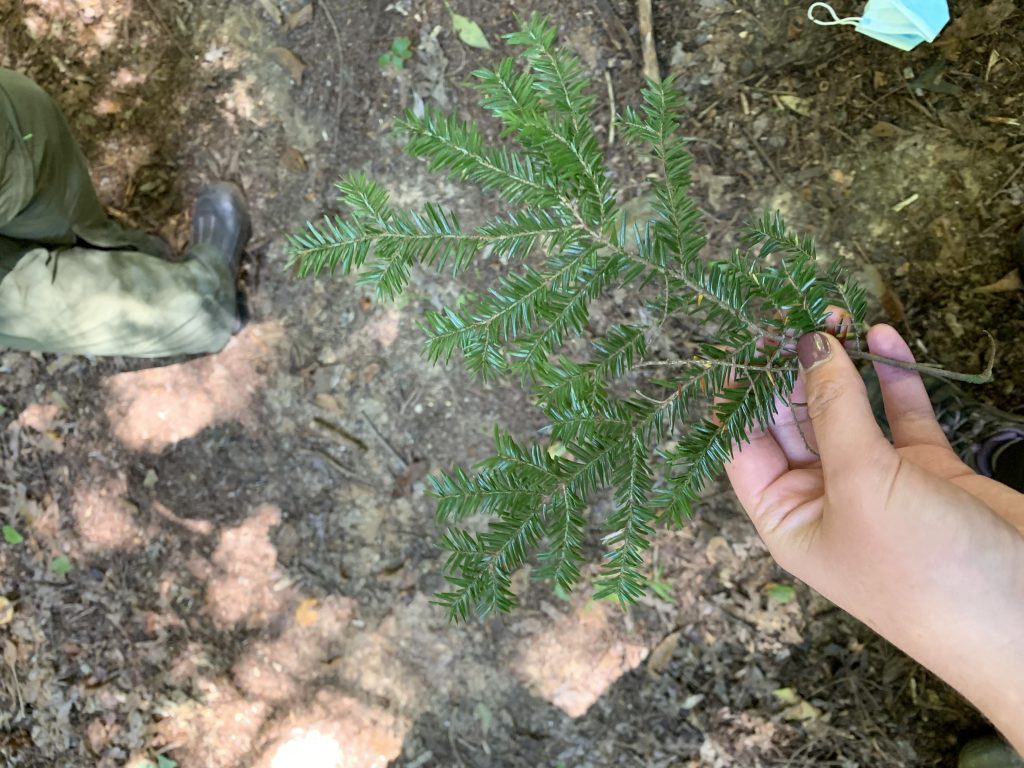 The top-side of Eastern Hemlock needles.

Eastern Hemlocks are very useful to wildlife. Many bird species rely on hemlock cove forests for nesting habitats, such as the Black-Throated Blue Warbler, Black-Throated Green Warbler, and Blackburnian Warbler. Additionally, Black Bears rely on hemlocks for climbing. According to the US Forestry Service, from April to May female Black Bears will spend 95% of their time within 600 feet of Eastern-Hemlock or White Pine. Furthermore, Black Bears will make use of large hollow trees for dens.

Sourwood can be identified by its alternately arranged drooping leaves. Leaves are simple with slightly toothed margins and taper to a point. Additionally, if you chew one of the leaves it tastes sour, hence the name! The flowers are found on hanging on a long racus and are creamy white and bell shaped. 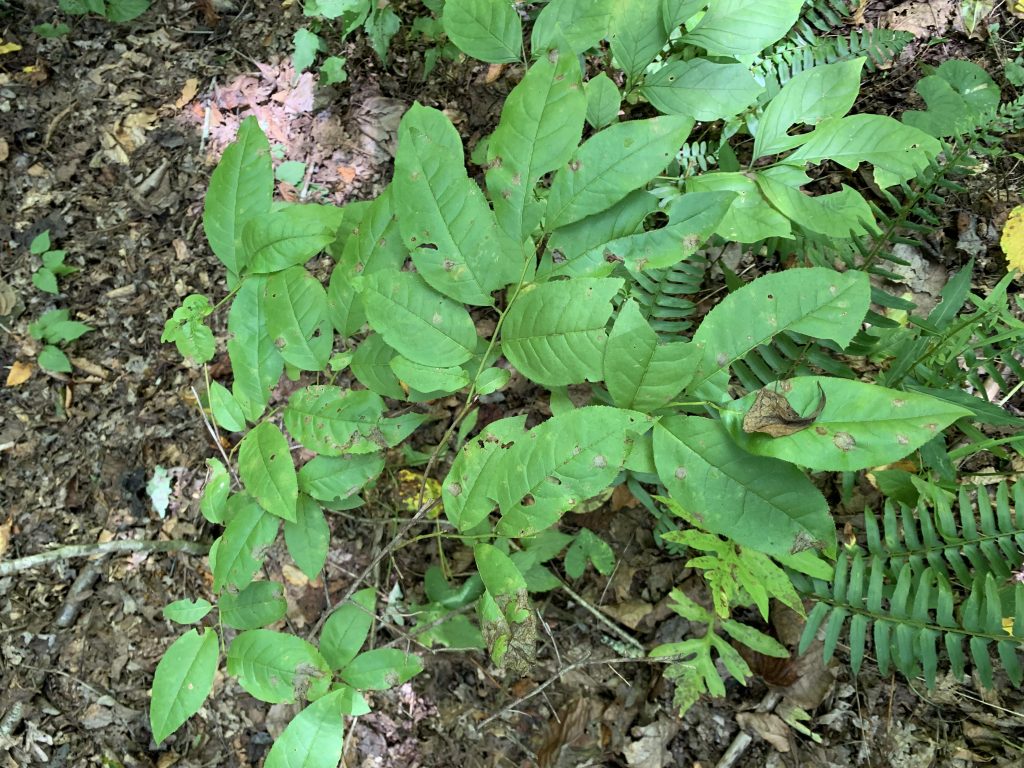 In peak flowering season, honeybees will nearly exclusively collect pollen and nectar from sourwood trees (due to their density), and it apparently makes especially delicious honey. The taste of sourwood honey is “likened to gingerbread” and “smells like cinnamon and cloves and has a smooth syrupy texture.” Sounds good to me! Read more about it here: https://ashevillebeecharmer.com/honey-types/sourwood-honey-blog/

The American Chestnut is facing the wrath of a fungus called Chestnut Blight, Cryphonectria parasitica, which was introduced to the United States in the early 1900s. Chestnut Blight creates a cankers on the tree, dieback, and death of aboveground components of the tree. The root system remains and small sucker trees pop up off of the dead trunk and eventually succumb to the fungus, too. Chestnut Blight is spread by air and animal dispersed spores. Infection occurs once germinated spores infiltrate the bark. Cankers develop weeks later and water stress the tree, lower its response to infection, and tissue at or above the canker die.

According to our resident field trip expert, Gavin, efforts are being made to create blight resistant hybrids.

The Butternuts, similar to the Chestnuts, are suffering from an introduced fungal pathogen called Butternut Canker, Sirococcus clavigignentijuglandacearum. The fungus works in a similar way to Chestnut Blight by causing cankers on the tree that cause tissue damage and death. Spores are similarly spread through the air, by animals, or by rain splash. Established trees have a better chance against the cankers, but young saplings are often killed by the pathogen. Early removal of cankers and preventing the spread of the disease is the only known method for treatment as there no cure right now. 🙁 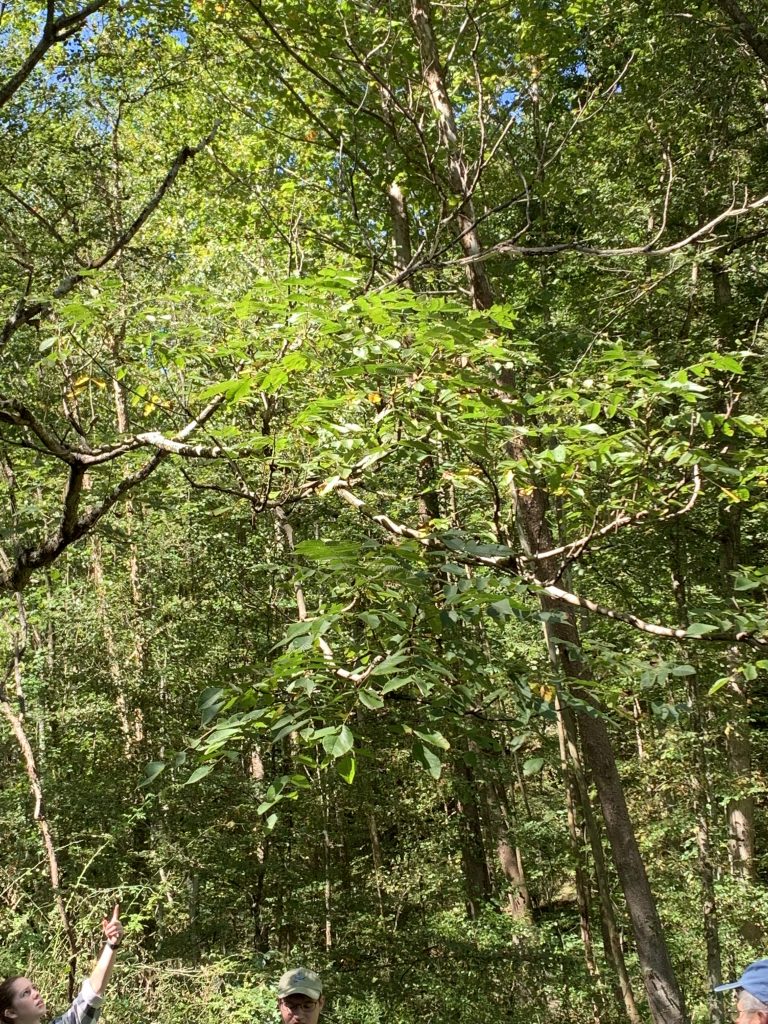 A faraway picture of Butternut!

The Appalachian Gametophyte is a spectacular little fern in its unique form. Traditionally, the thing you picture in your mind when you think of a fern (you know, those long leafy fronds) are sporophytes. The typical fern gametophyte is a highly reduced and ephemeral heart shaped structure that houses the archegonium and antheridium and reduces as the sporophyte fern matures. The Appalachian Gametophyte, however, is characterized as only having the gametophyte phase; the sporophyte has never been observed. Wow! 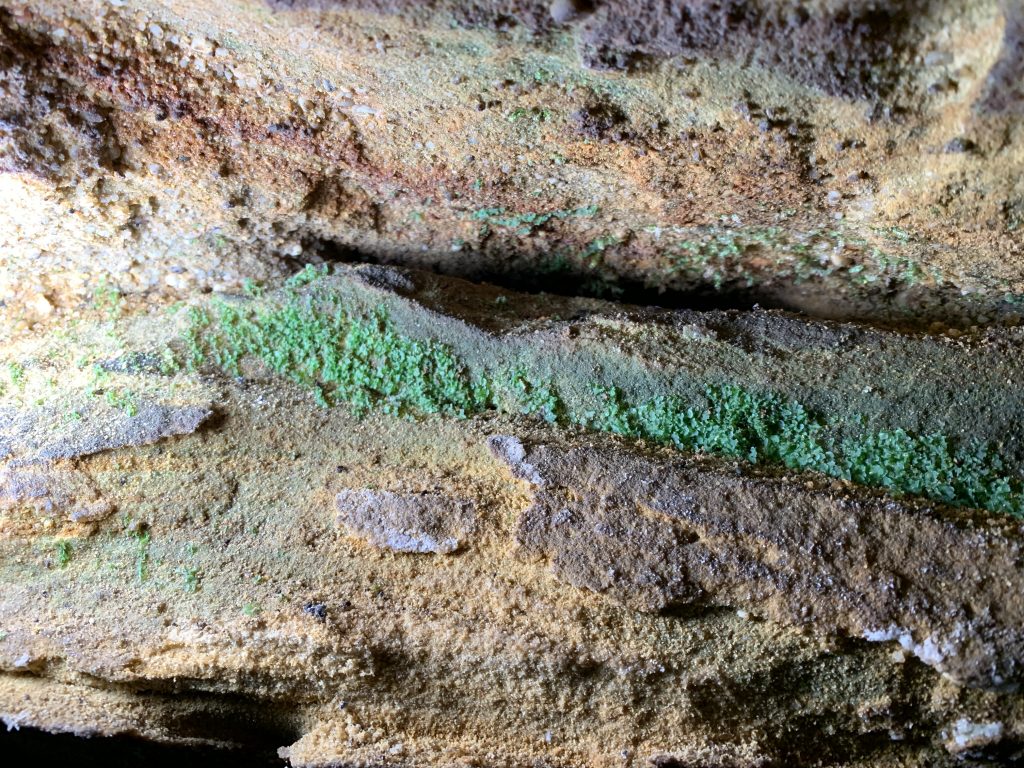 Appalachian Gametophyte on the wall of a (super cool) cave!

The Appalachian Gametophyte reproduces asexually by gemmae rather than spores because it doesn’t have the sporophyte to disperse those spores. The gemmae are large, around 0.2-1.0 mm long (which is huge compared to spores) according to the American Journal of Botany article (“Unraveling the origin of the Appalachian gametophyte, Vittaria appalachiana” by Pinson and Shuettpeltz in 2016). The sheer size of the gemmae rules out long distance wild dispersal, so it’s likely that they are dispersed short distances by wind, water, or animals. In a publication by Kimmerer and Young, gemmae were found to be dispersed by slugs, so it is possible that the Appalachian Gametophyte gemmae are similarly moved.

The River Birch has alternate simple leaves with double-toothed margins. The charismatic bark is light and peeling off in sheets. 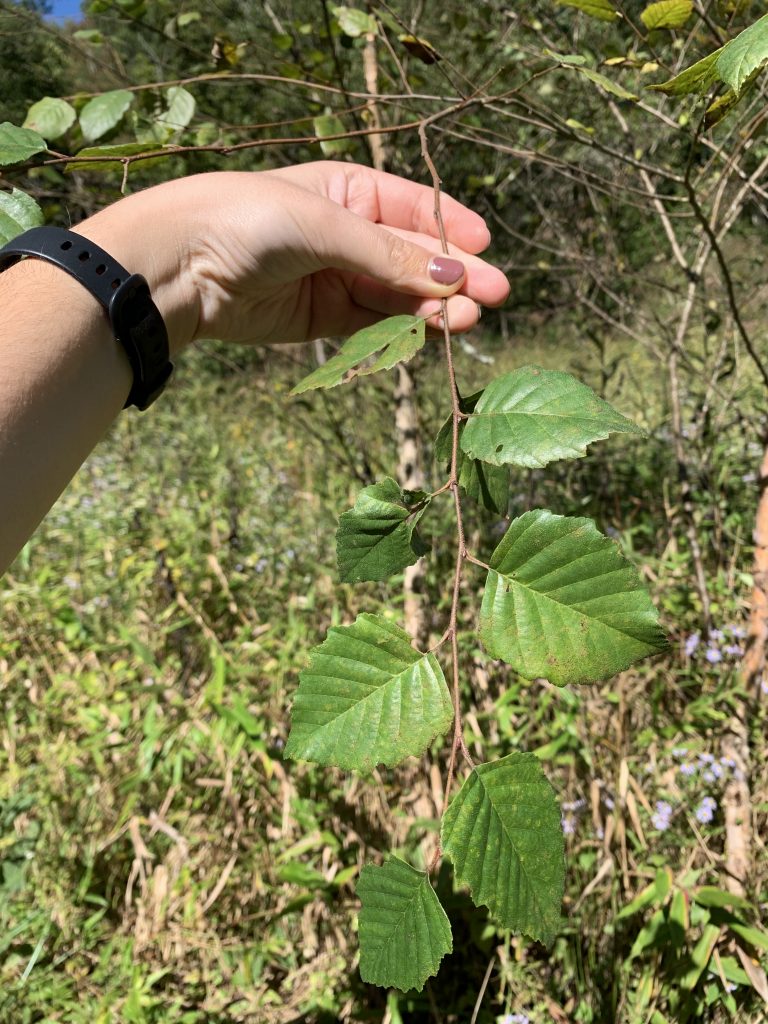 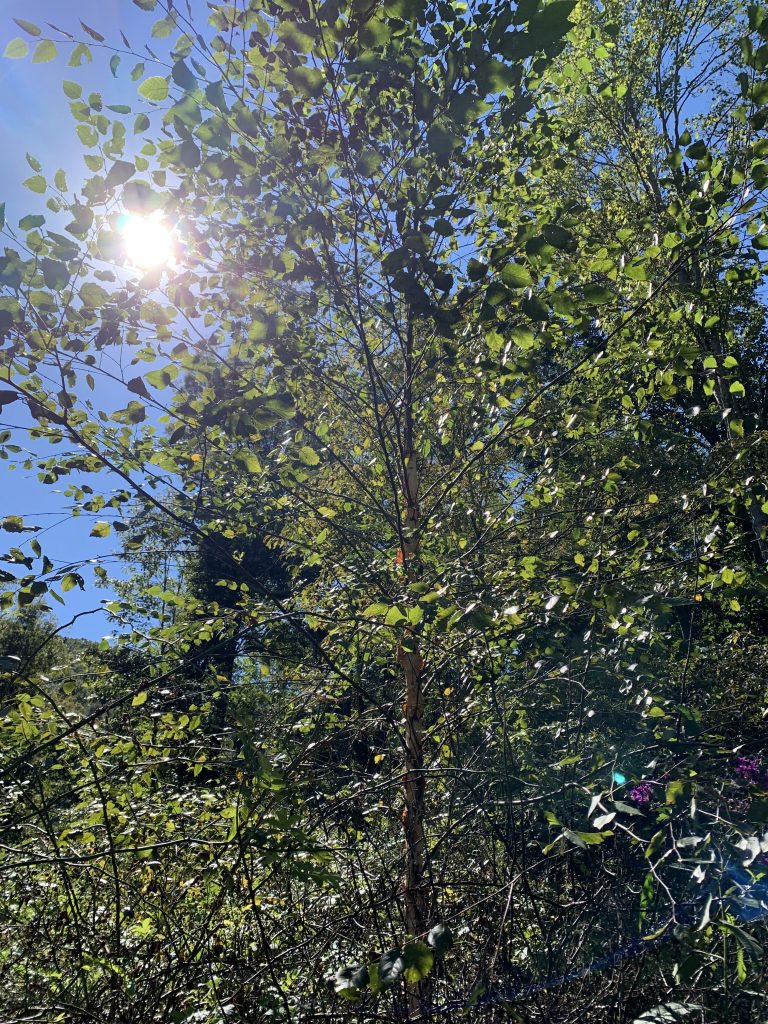 Many Indigenous peoples in the East had uses for the Birch tree, often boiling the sap to make sweetener. The Catawba people used a the boiled buds to make a salve to treat ringworm and other dermatological sores. Read about more uses for the River Birch by Indigenous peoples and colonizers here: http://libraryexhibits.uvm.edu/omeka/exhibits/show/uvmtrees/river-birch/river-birch-uses 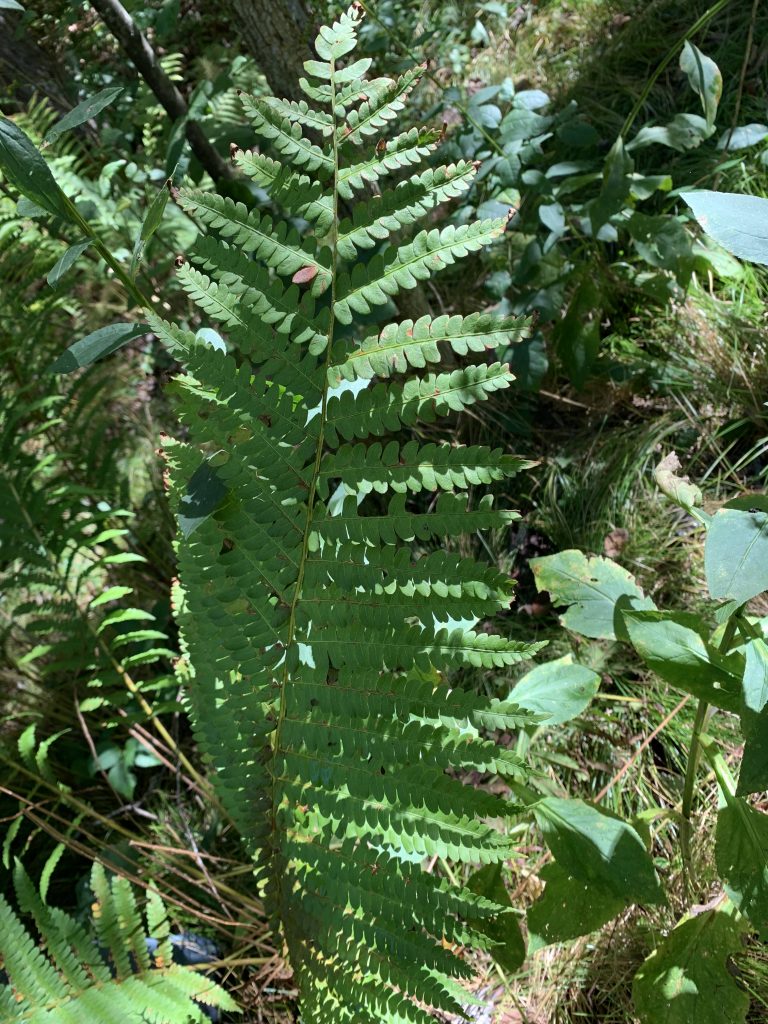 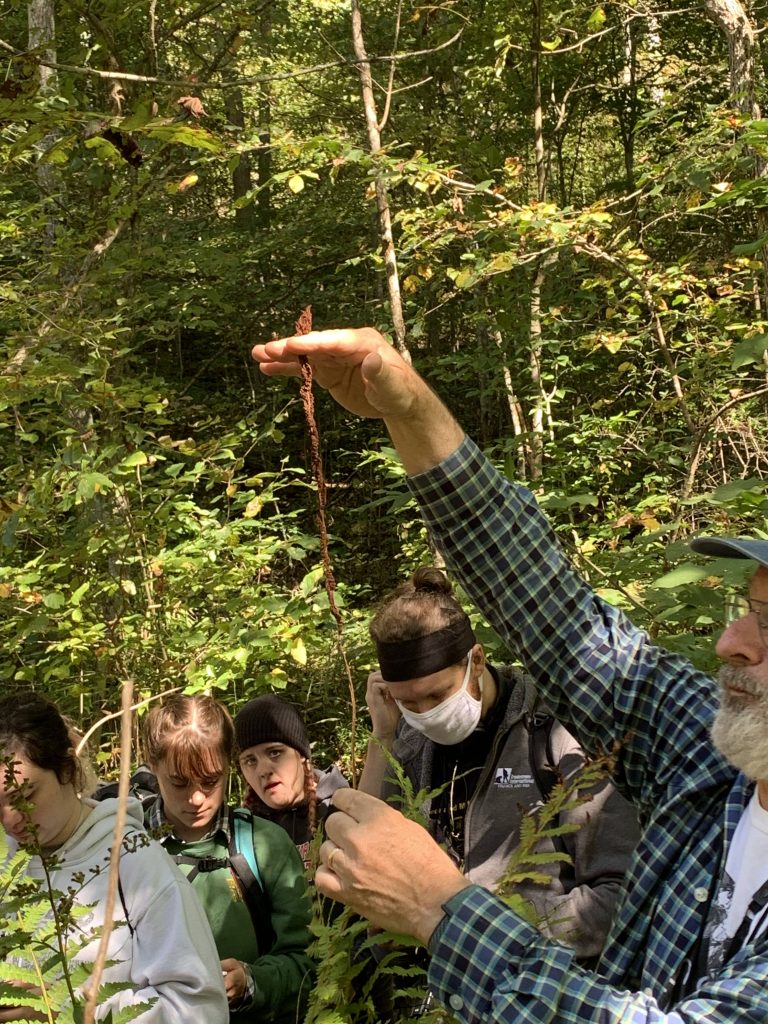 Cinnamon fern fertile frond in the hands of Dr. Klipps!

Historically, the Abnakine and Menominee peoples utilized the Cinnamon Fern as a food resource, but currently all parts of the plant are considered to be a carcinogen and shouldn’t be consumed.

The Christmas Fern has pinnate leaves and the fertile and infertile parts of the plant can be found on the same frond in different sections, classifying it as demidimorphic. The bottom of the frond has the large, green lance shaped leaflets. At the top, the leaves get much smaller and look browner, and the undersides of the leaves are covered in spore-releasing structures. 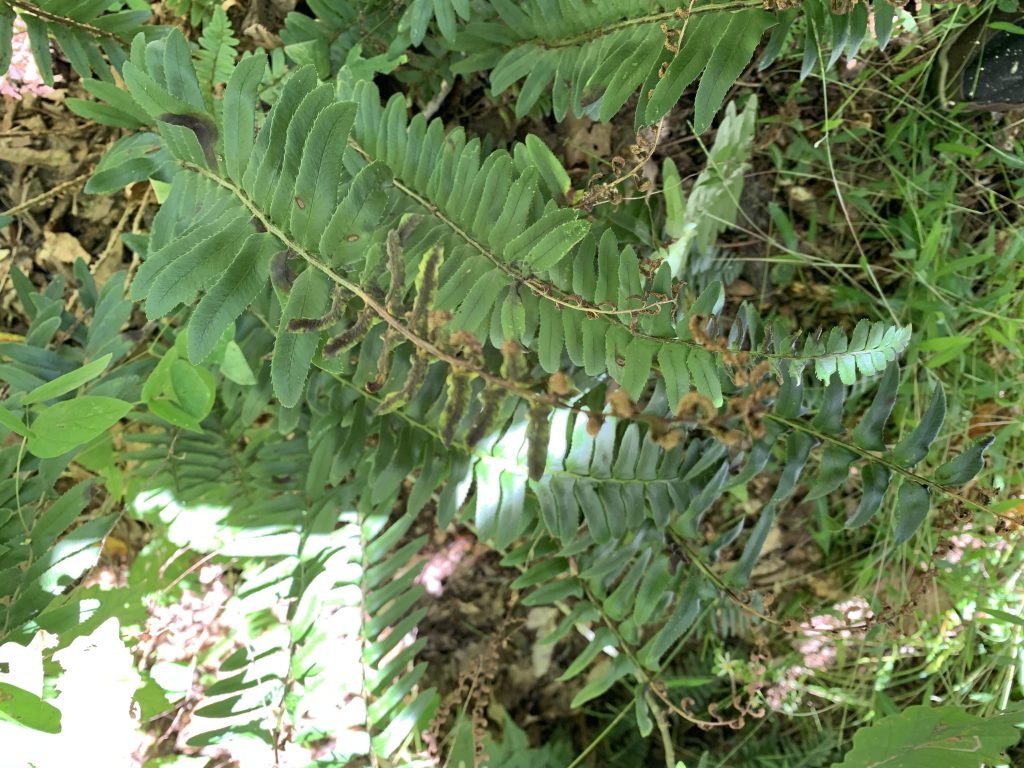 Here’s the combination sterile and fertile frond of the Christmas Fern!

Christmas Ferns often grow in aggregations of a few individuals, and can provide a concealing understory habitat for ground feeding and nesting species of birds. Additionally, when found in large masses, the density of growing ferns can stabilize soils from erosion with their roots.

Winged Sumac is characterized by its winged rachis along the pinnately arranged, alternate leaves. The leaflets are thin and lance shaped, and turn beautifully red in the fall. Although the individuals we found were small, the Winged Sumac can grow to be a large bush, around 25 feet. 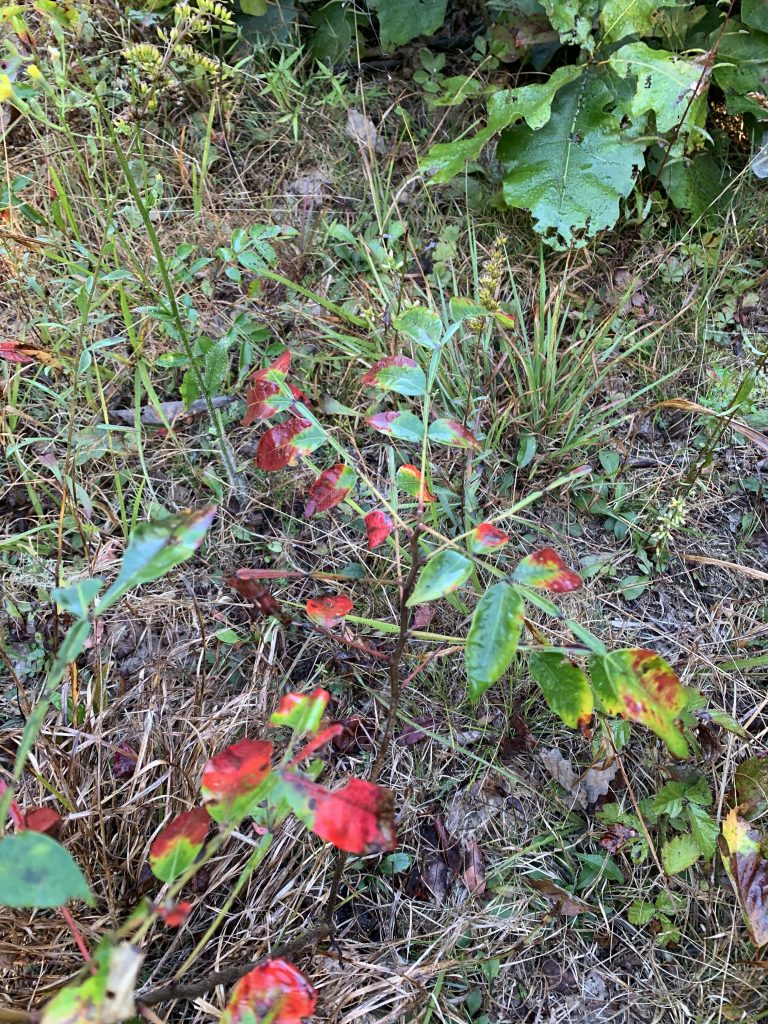 Winged Sumac! If you look closely you can see the winged rachis.

The Winged Sumac drupes provides food to many wildlife species, including upland game birds, passerines, and mammals. Deer enjoy consuming the twigs. Furthermore, the Winged Sumac is recognized for its attraction and support of many native bee species by providing nectar/pollen and nesting materials.