In this post I will recount our lovely class field trip to Battelle Darby Metro Park and Cedar Bog (that’s not a bog) on a quest to link Ohio’s geographic past to present plant life.

Roughly cut, Ohio can be split into two distinct eastern and western halves that are dominated by two chemically different rock types. The East is dominated by sandstone covered in a layer of shale. Shale is easily erodible, but sandstone, on the other hand, is not. The shale was eroded over time but the sandstone remained, resulting in the dramatically steep hills and deep valleys I grew up exploring (in Lorain County, located in that north-east sandstone-y part of Ohio). The West, on the other hand, is dominated by easily erodible limestone. Over the last 200 million years, that limestone has been eroded to form the flat, level landscape so often associated with Ohio.

The sedimentary rock layers of Ohio were historically (from bottom to top) limestone, then shale, then sandstone, which were arranged in a low arch prior to any erosion occurring. For over 200 million years, the Teays River eroded the limestone of western Ohio and the shale and sandstone of easter Ohio. The Teays ran in this fashion until the time of glaciation in the Ice Age. The movement of the glaciers was halted by the hard, steep sandstone hills in eastern ohio, and the glacial boundary can be seen sketched here: 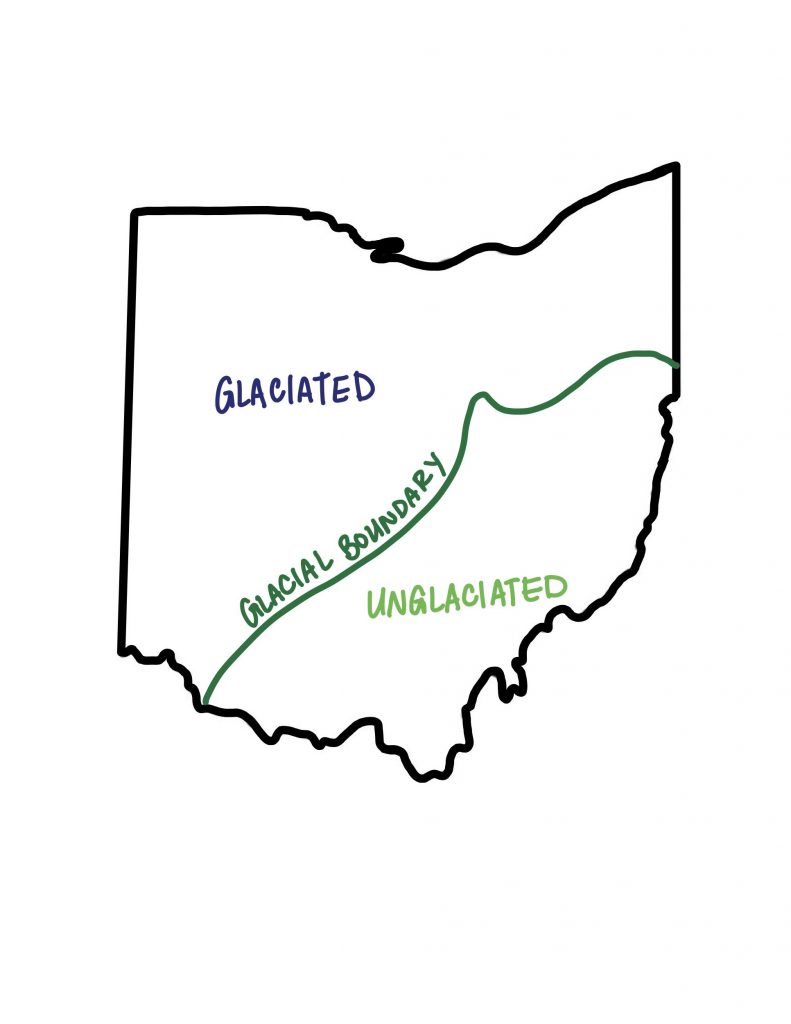 This outline ohio definitely was not traced.

Glacial till is essentially a mixture of all the stuff a glacier kicks up as it moves: silt, sand, clay, large boulders. Western Ohio has more lime and clay rich till, whereas eastern ohio is dryer and more arid. The substrate in western Ohio is has poor drainage (it’s hard for water to drain through the impermeable surface), which creates pockets of land with low-oxygen pools in wet parts of year and droughts in the dry parts. Still western Ohio is overall very nutritious in its limey-goodness that creates better growing conditions for plants. Eastern Ohio, on the other hand, with its sandstone substrate creates acidic environments of low nutrient availability. Still, in areas where that sandstone can mix with clay, there is higher nutrient availability and less acidic soils. Additionally, the shale layer on top of the sandstone bedrock is impermeable and causes water to run off and away from it, fostering even dryer conditions in the dry season.

Here are some limey trees and shrubs I was lucky enough to document throughout our field trip: 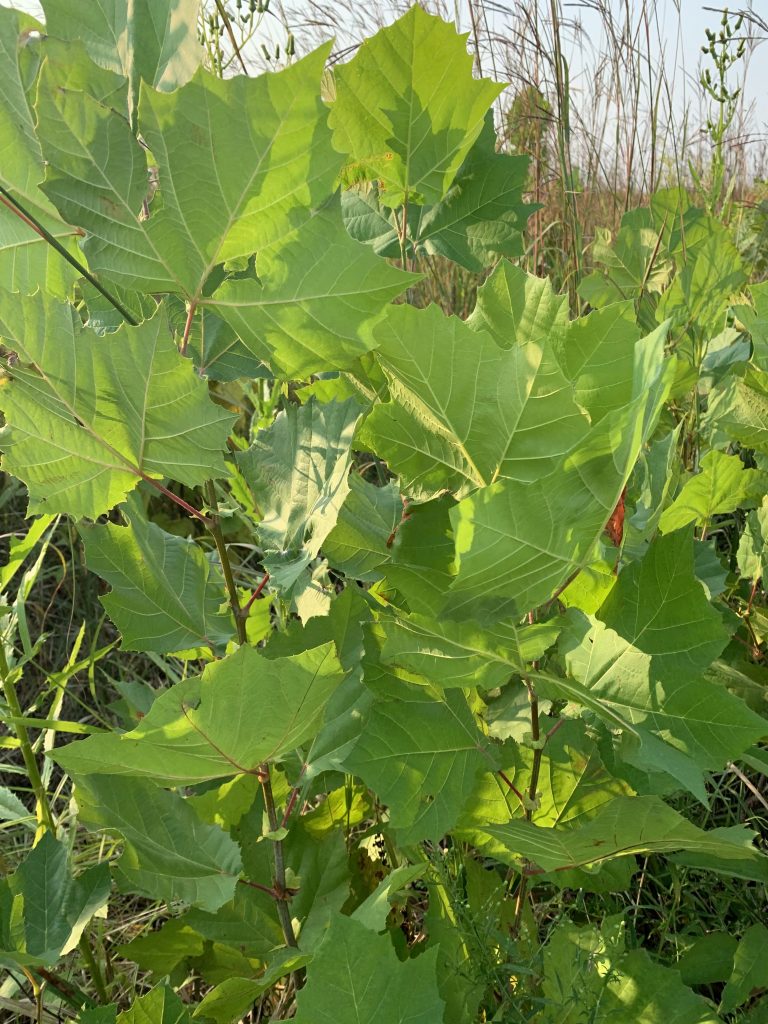 The American Sycamore can be identified by its broad, maple like leaves, round brown puffball looking fruits, and jigsaw patterned peeling bark. This particular tree is still a sapling, found at Battelle Darby, but mature trees can grow to be dominatingly tall. American Sycamores are partial to lowland areas. 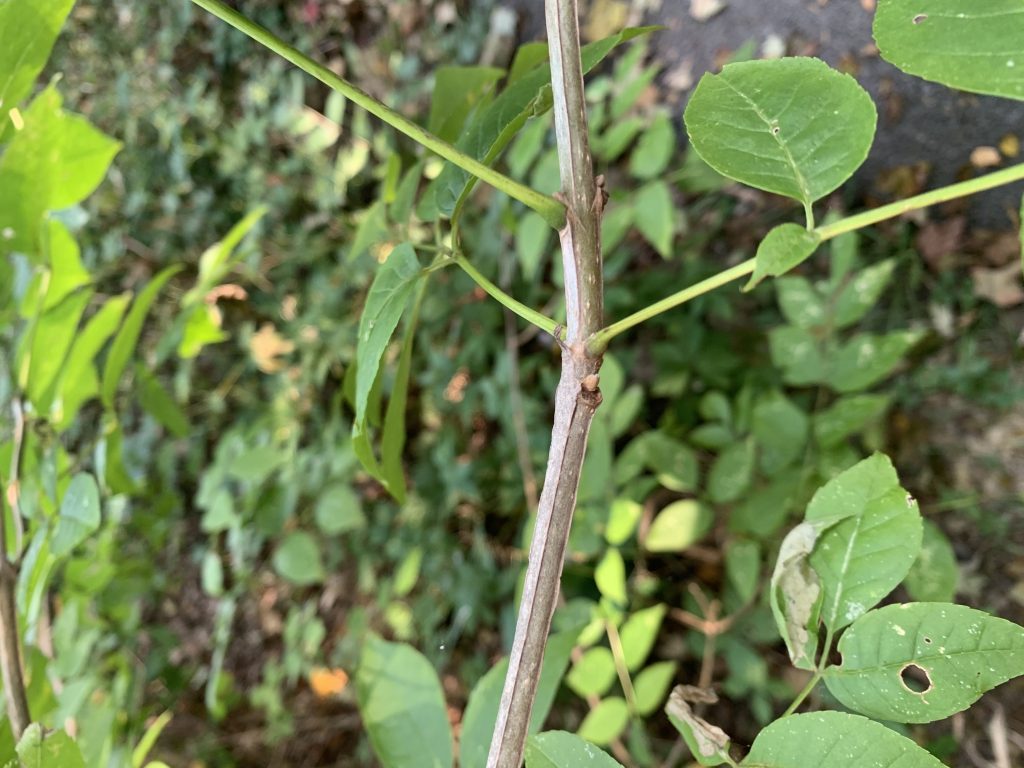 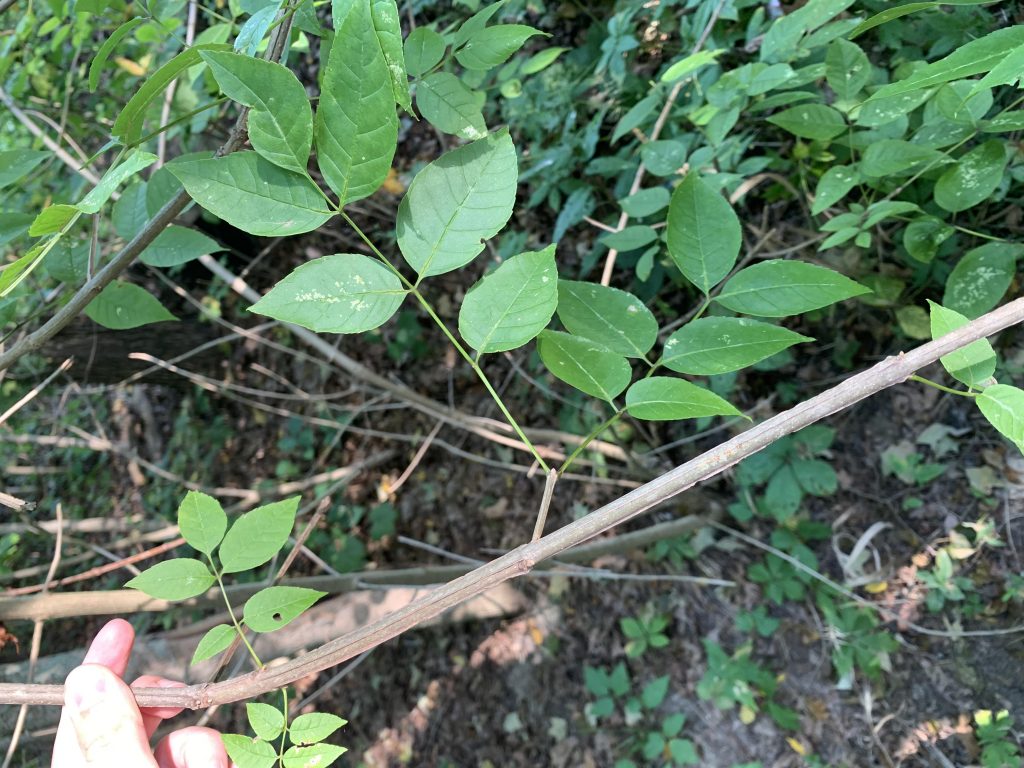 Blue Ash can first be identified as an ash by its opposite, pinnate leaves and narrowed down to Blue Ash by its square twigs and stems. We discovered this specimen at Battelle Darby Metropark. This particular species of Ash is not called “Blue” because of its color (it’s green, just like every other ash), but because of the blue dye that can be extracted from the inner bark. 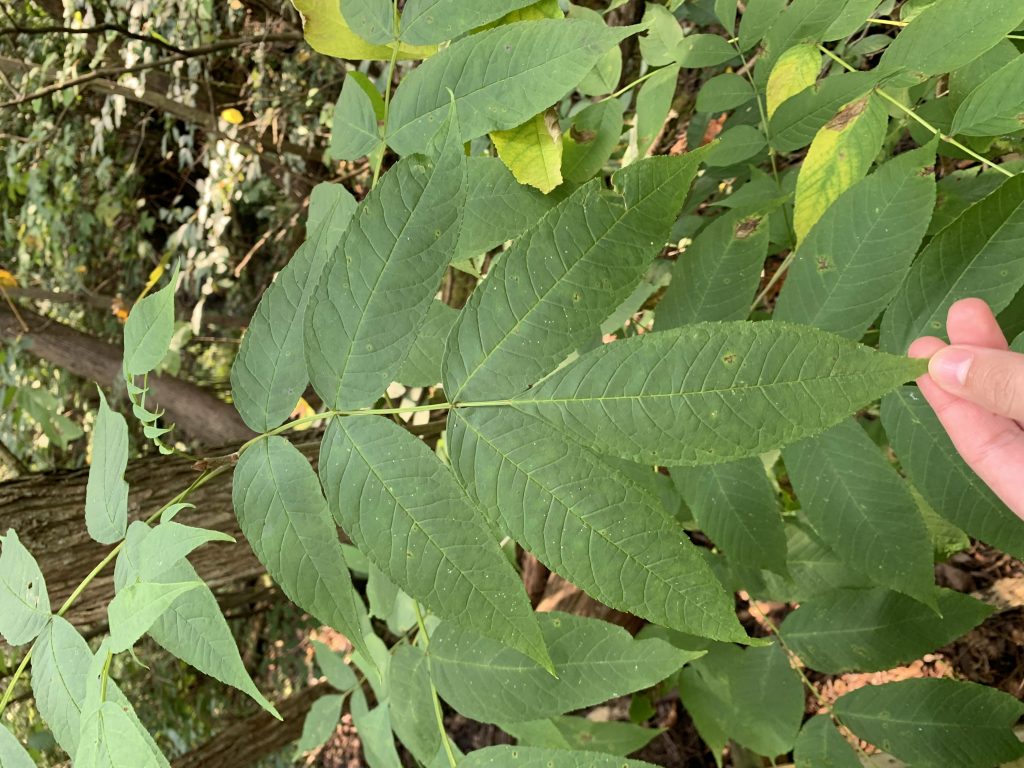 The Black Ash loves to have its feet wet and is found in wet bottomlands, like the fen that is Cedar Bog where this particular tree was found. The Black Ash is identifiable by its lack of petiolules on the leaflets; that is, the leaflets are directly attached to the petiole.

The Black Ash is famous for its use in basketmaking. The logs are split along the annual growth rings and waved into gorgeous baskets, which have become a rare and valued art form in Indigenous communities, especially the Potawatomi. Featured in Robin Wall Kimmerer’s gorgeous novel Braiding Sweetgrass, she explores the increasing rarity of the Black Ash due to habitat loss, the trees dependence on caring humans to create habitat for it, and the wonderful connection one can make to the Ash through basketmaking. She writes about the gentle teaching of John Pigeon and the legacy of the Pigeon family as basketmakers. Their baskets are works of art, and I highly recommend looking up their artwork and reading there story. Here’s a good place to start: https://www.potawatomi.org/blog/2015/10/23/gun-lake-potawatomi-elder-and-his-family-of-black-ash-basket-weavers/ 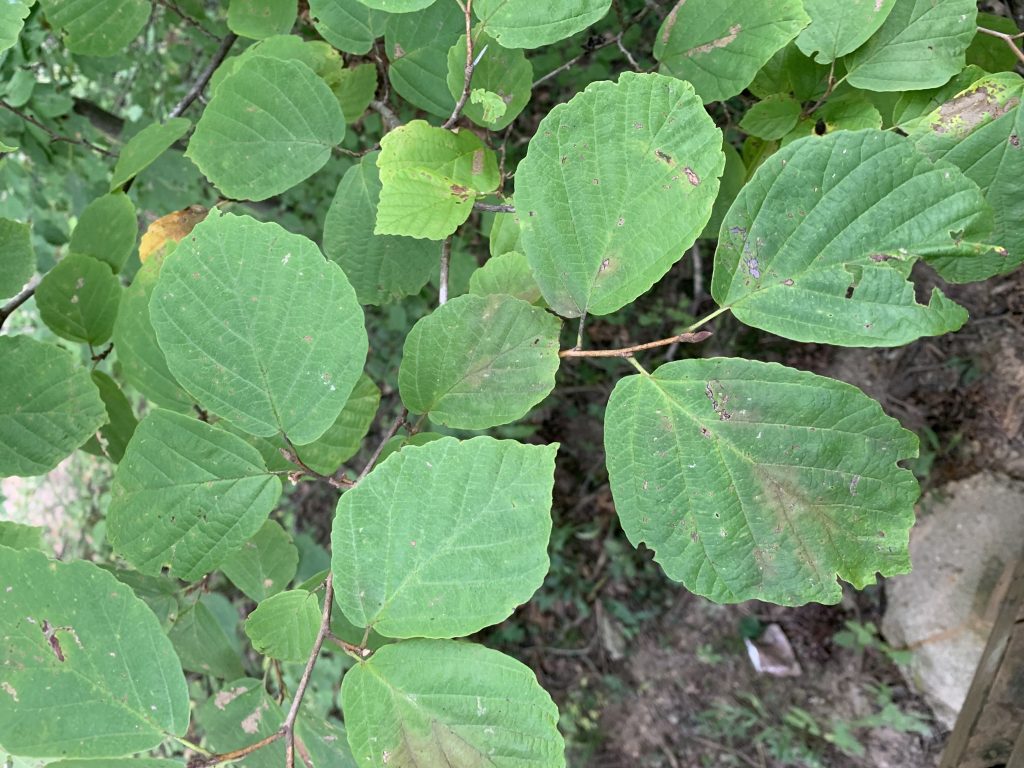 Common Witch-Hazel is a small shrub has wavy-toothed leaves with uneven leaf bases (see how they aren’t symmetrical where the leaf attaches to the petiole). This particular specimen was found at Battelle Darby Metropark. The bark extract is very commonly used for medicinal purposes and in dermatological care, I even have some in my bathroom right now that I use on my face. It’s also said that twigs of witch-hazel were used as wands to summon water. 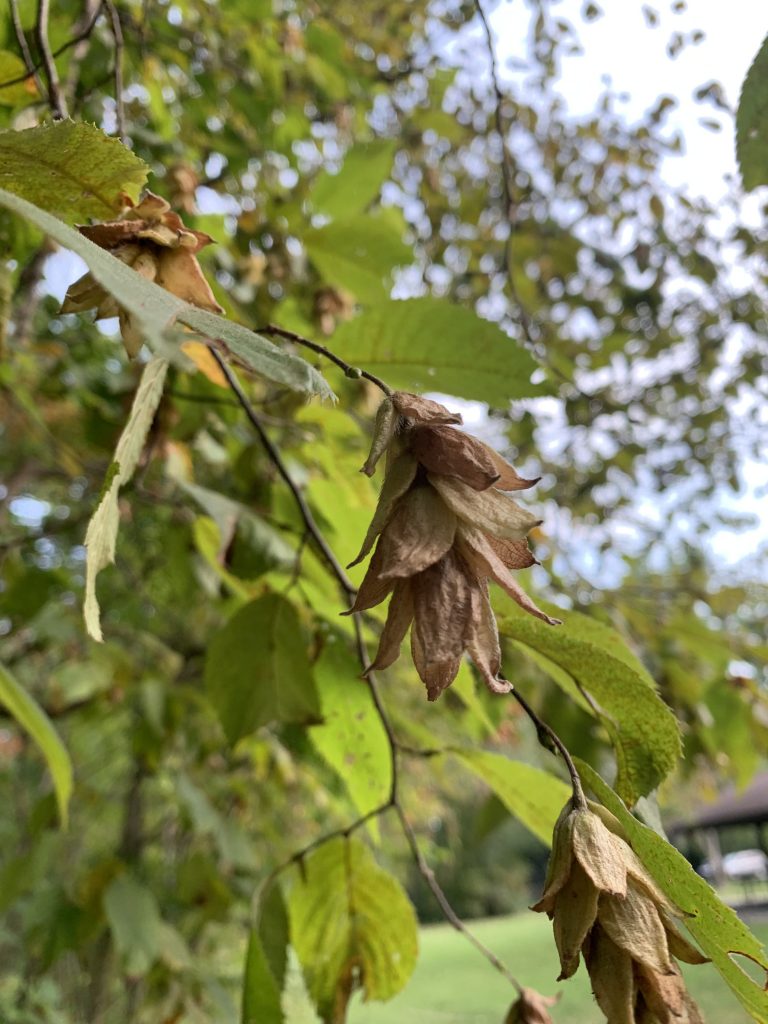 The Hornbeam is recognizable as a small tree with alternating simple leaves and, in the fall, with samaras that resemble hops. However, unlike hops, these fruits sadly don’t make delicious IPA’s, but I’ll love them anyways. This tree was found at Battelle Darby Metropark and made me want a nice tasty beer.

Some species are limited to the dry, sandstone hill conditions created in eastern Ohio. Here’s 5 species of trees and shrubs you would be able to find in these conditions: the Chestnut Oak (Quercus montana), Scrub Pine (Pinus virginiana), Hemlock (Tsuga canadensis), Mountain-laurel (Kalmia latifolia), and Trailing Arbutus (Epigea repens).

A line can be drawn at the ancient glacial boundary in Ohio to separate the limey west from the sandstone-y east.

Rhododendron is distributed on the tributaries of the Teays River system in southern Ohio right in the lateral middle of the state due to its movement into the range before glaciation occurred. 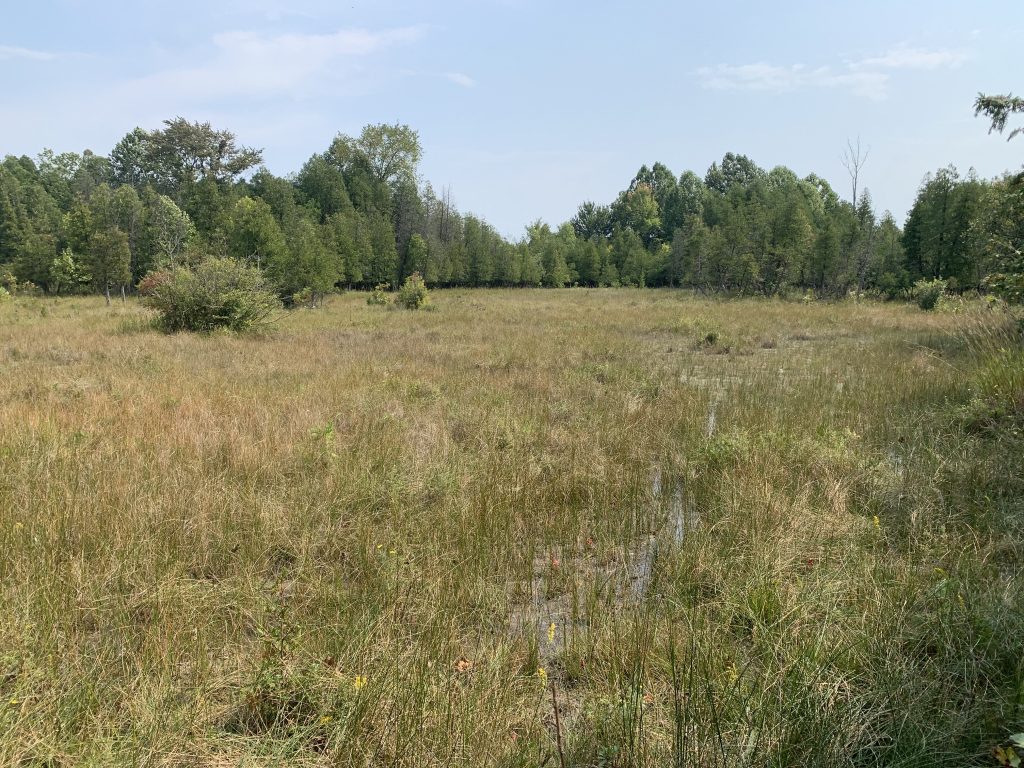 If Cedar Bog isn’t a bog then what the heck is it, you ask? Well, it’s actually a fen! As was mentioned by their naturalists as well as many interpretive signs throughout the boardwalk and nature center (even in the bathroom), “bogs clog, fens flush.” Cedar Bog is situated in a breach in the superficial clay layer that allows access to the water flow beneath it. The “bog” sits atop an aquifer composed of water, saturated sand, and gravel that allows water to flow down into the ancient buried Teays River valley. There, that water cools to a constant, chilly 55 degrees Fahrenheit. In a fen like Cedar Bog, water flows in from the surface as rain and through springs, then smaller streams “flush” the system by providing water movement out of the system. In the period the water was in the fen, it picks up dissolved limestone and becomes of an alkaline or neutral acidity and clears.

I was tasked with discovering some neat methods of seed dispersal.

Of course, I found the lovely and quite incredible summer-flowering Spotted Touch-Me-Not (Impatiens capensis), also known as Spotted Jewelweed. It has possibly my favorite method of dispersal I have ever experienced: BALLISTIC SEEDS! Yes, ballistic, as in the fruits explode. Next time you’re on a walk and see these gorgeous, distinctive orange flowers, do yourself a favor and look for any of the plump green fruits that, to me, look like swollen pea pods and squeeze the bottom. Make sure you wear protective eyewear (just kidding).

The Spotted Touch-Me-Not can be identified by its about 1-inch long cornucopia shaped flowers with a little curlicue at the small end. The flowers are a spunky orange color with darker/red spots near the opening. 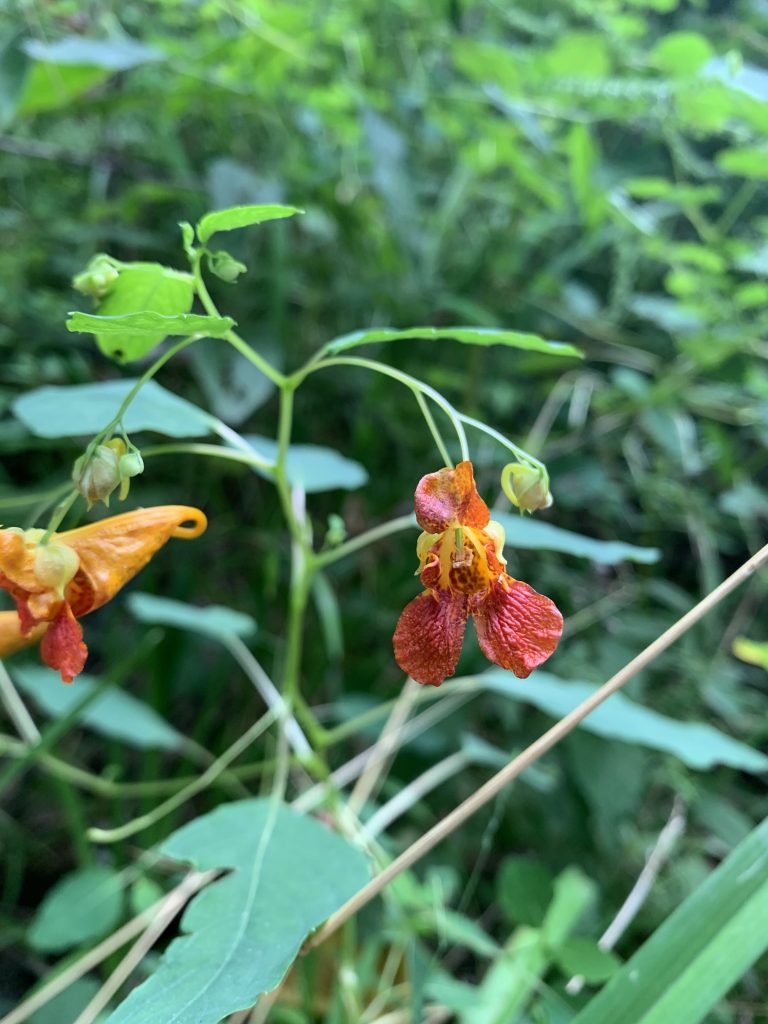 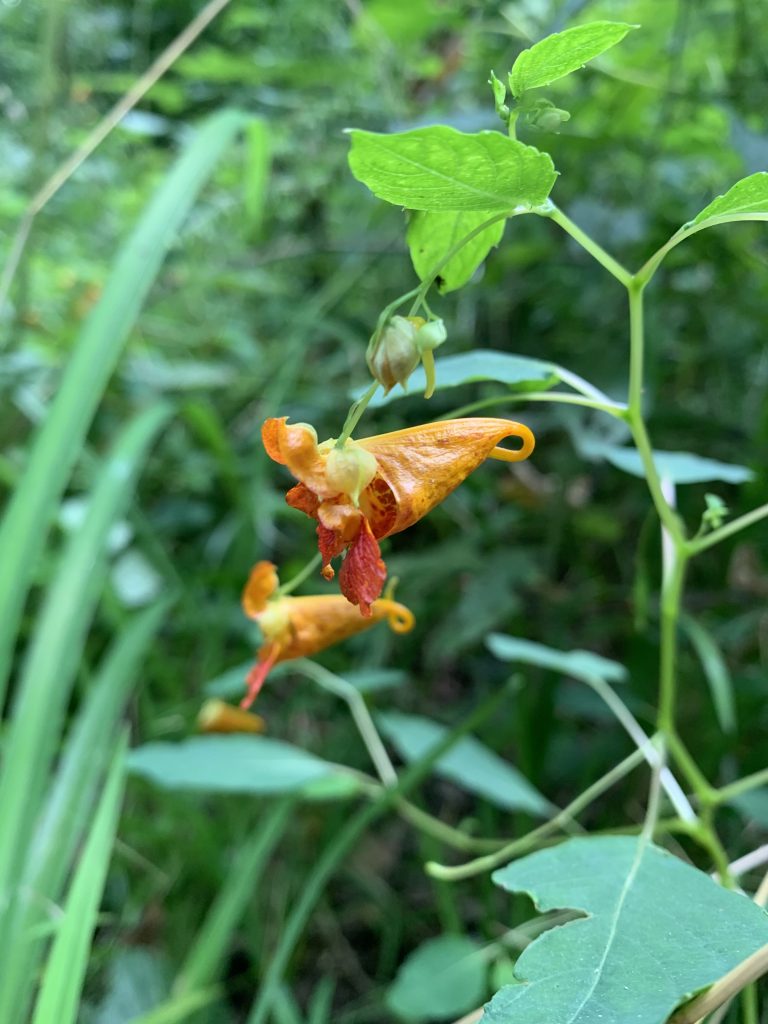 Here you can watch my shotty video-work capturing this awesome dispersal method:

Jack in the Pulpit

Also called Indian Turnip and Arisaema triphyllum, Jack in the Pulpit is a very neat shade-loving plant that can live past 25 years (wow!!!). I chose this plant for its incredibly vibrant red berries that even made me want to eat them. The delectable looking berries are eaten by birds (thruses, in particular) and rodents. If you’re a lame human however, you might want to skip picking and eating these fruits since they are riddled with calcium oxalate crystals that can cause skin irritation and a painful burning sensation when eaten.

Jack in the Pulpit can be identified by its large compound leaves with groups of 3 leaflets. Each leaflet can be up to 7 inches long, and the middle one is usually the largest. In flower, the club shaped spadix sits erect inside a hooded leaf that has deep purple veins. In late summer, the Jack in the Pulpit is easily recognizable by the cluster of bright red berries underneath the flowers. 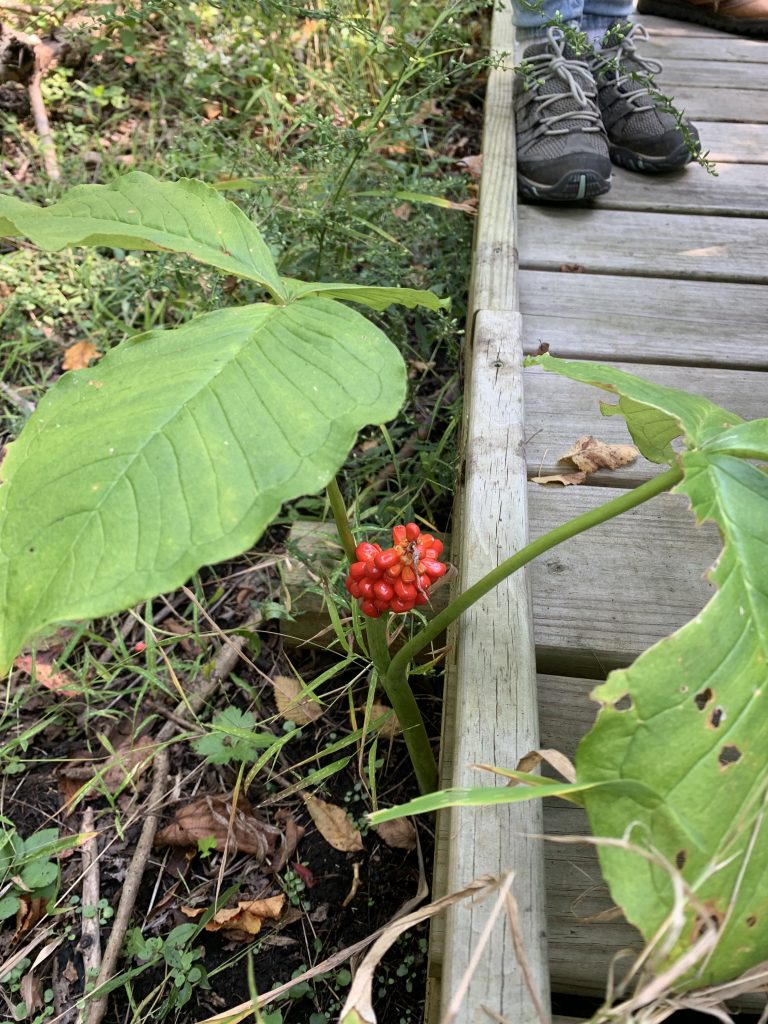 The Meskwaki Indians had a sneaky use for the painful consumption of the Jack in the Pulpit fruit. They have a story that describes the process of hiding the berries within meat and feeding it to their enemies; the taste of the fruit was disguised by the meat but the calcium oxalate would still cause painful reactions and potentially death to those who consumed it. Scary but clever.

Honorable Mentions from Cedar Bog (that’s not a fricken bog):