What do you think of when you hear the word tree? Something big, tall, and leafy? Maybe something green? Do you think of the relieving shade they provide on a hot sunny day? Or maybe the gentle embrace of a tree as you sit at its base, back leaning up against the trunk? Just me on that last one?

As much as I appreciate sitting under a wise old tree, I admit that, outside from a few species, that I am often “tree blind.” The term, coined by Gabriel Popkin in the 2017 New York Times article “Cure Yourself of Tree Blindness,” describes the plight of the modern Homo sapien: simply seeing all trees as big, woody, green things. While I make an effort in my daily life to appreciate the trees I walk by and thank them for the ecosystem services they provide me, I’ll be the first to admit how easy it is to glaze right past the magnificent oak tree in front of me in lieu of my phone or the cool bird that just flew into its branches. Tree blindness robs both the human and the tree. The tree, while it isn’t longing for us to notice it, is robbed of our appreciation of the wonderful being that puts oxygen in our lungs, fruits in our mouths, and lines our sidewalks with beauty and shade. The human, on the other hand, is robbed of the a more complete understanding of the world around them; seeing and recognizing trees can provide opportunities for survival as well as a sense of familiarity and connection to nature.

Well, now that we’ve established why I think it’s important to learn how to recognize our tree neighbors, let’s get into some identification!

As I stood beneath the canopy of this lovely tree, a large yellow-green ball whizzed past my nose and landed with a resounding thud on the ground by my feet. Ah, it had seemed I had identified my first tree, Juglans nigra. 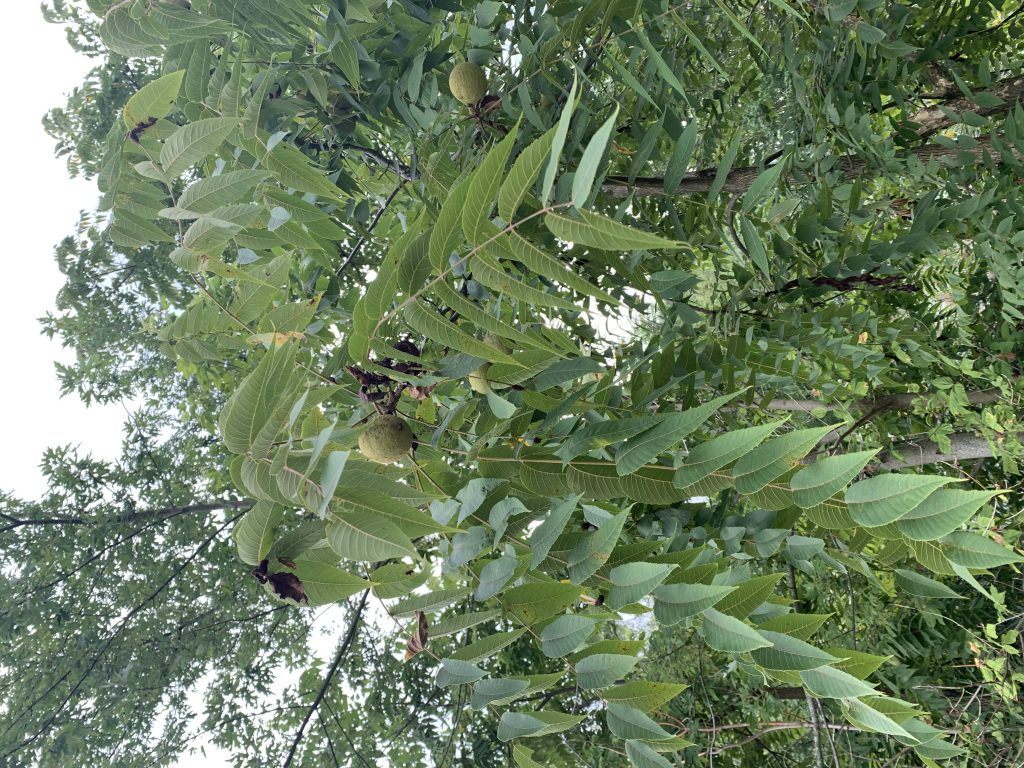 I found this tree near the Heffner Wetland Building at the Ohio State University Wetland Research Park, and it is usually found in wooded areas.

According to Chris Feeley at Iowa State University, the Black Walnut, like other members of its family, produce a chemical compound, juglone, that can injure and sometimes kill nearby susceptible plants. This toxin is produced in the fruit, leaves, and branches of the tree and can leach into the soil from the root system, and the Black Walnut has the highest concentration of juglone in its family. Read more about that here: https://www.extension.iastate.edu/news/2005/jul/070701.htm

As I continued my walk around the Ohio State University Research Wetlands, I found a Silver Maple, Acer saccharinum. The Peterson Field Guide to Trees and Shrubs describes these trees as being found in riverbank or floodplain areas, which is similar to the area I found it in Near the Olentangy River.

The Silver Maple is aptly named, as the undersides of the leaves have a silvery sheen to them (and are a bit fuzzy). The leaves are simple, and lobed with deep notches. As the leaves are oppositely arranged on the tree, the Silver Maple is easily identified to the Maple classification using the MAD BUCK acronym. MAD BUCK, Maple Ash, Dogwood, and Buckeye, describes all the trees in Ohio with opposite leaf arrangements. 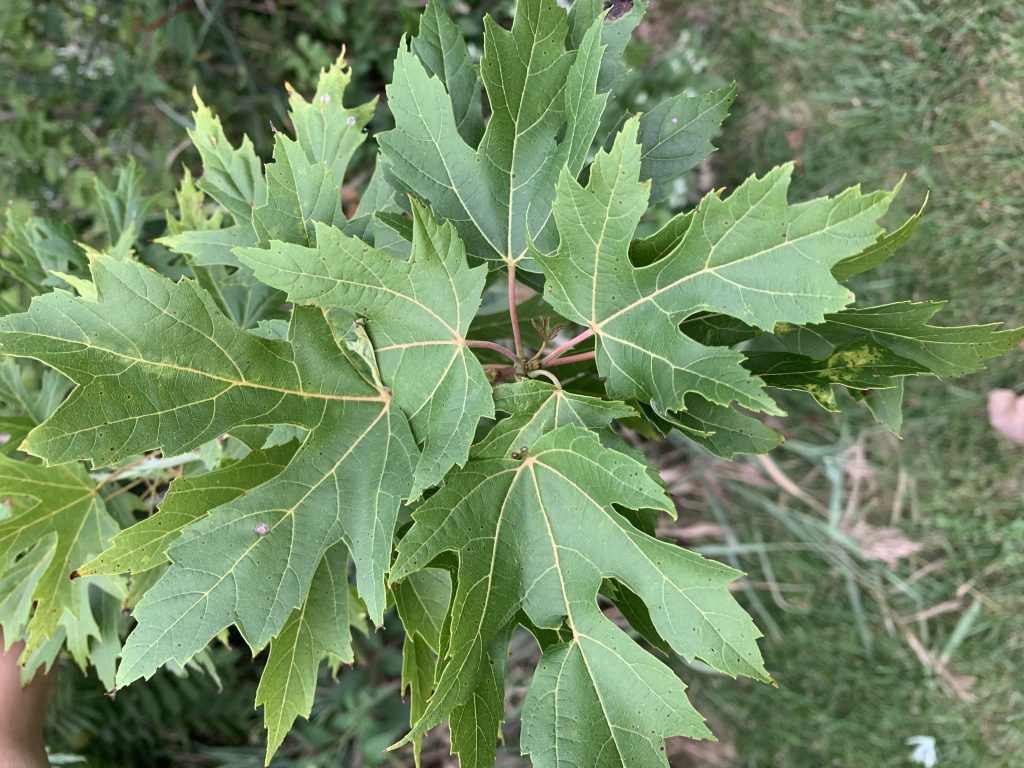 Indigenous peoples have several medical uses for Silver Maple bark, differing by group. Both the Cherokee and Ojibwa people utilized the bark for treating intestinal issues, like diarrhea. The Cherokee also made use of the bark to relieve menstrual pain and to treat hives and measles. Additionally, the Mohegan people made bark infusions to treat coughs. (From: https://www.indiananature.net/pages/taxa/Plantae/a/Acer_saccharinum.php)

Carrying on down the Olentangy Trail, I spotted something with huge leaves. I stopped and said, “Wow, those are some huge leaves.” Flipping through my Peterson Field Guide to Trees and Shrubs with wonder, I finally identified Magnolia tripetala.

The Umbrella Magnolia can be identified by its alternate, simple leaves with smooth, entire edges. Each leaf (did I mention that they’re huge?) ranges between 8 and 27 inches long. Combined with the thin leaves and hairless buds, I was confident that I had found the Umbrella Magnolia.

I found this tree just off the path near the riverbank in a section that I’ve seen flood multiple times in heavy rain. 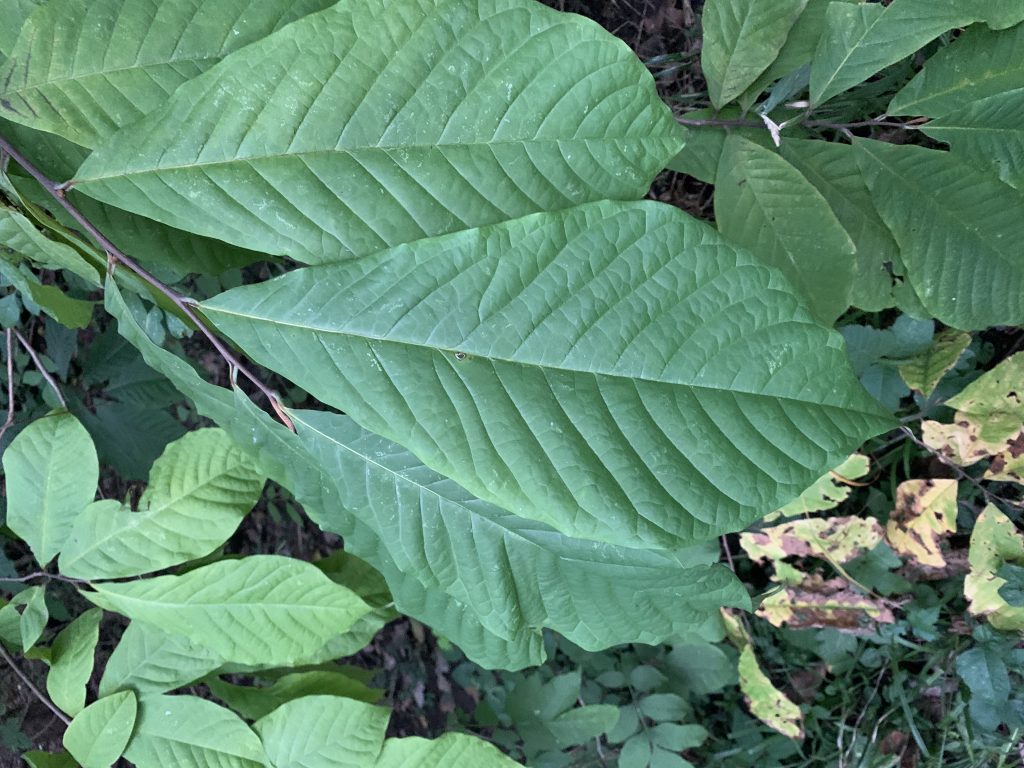 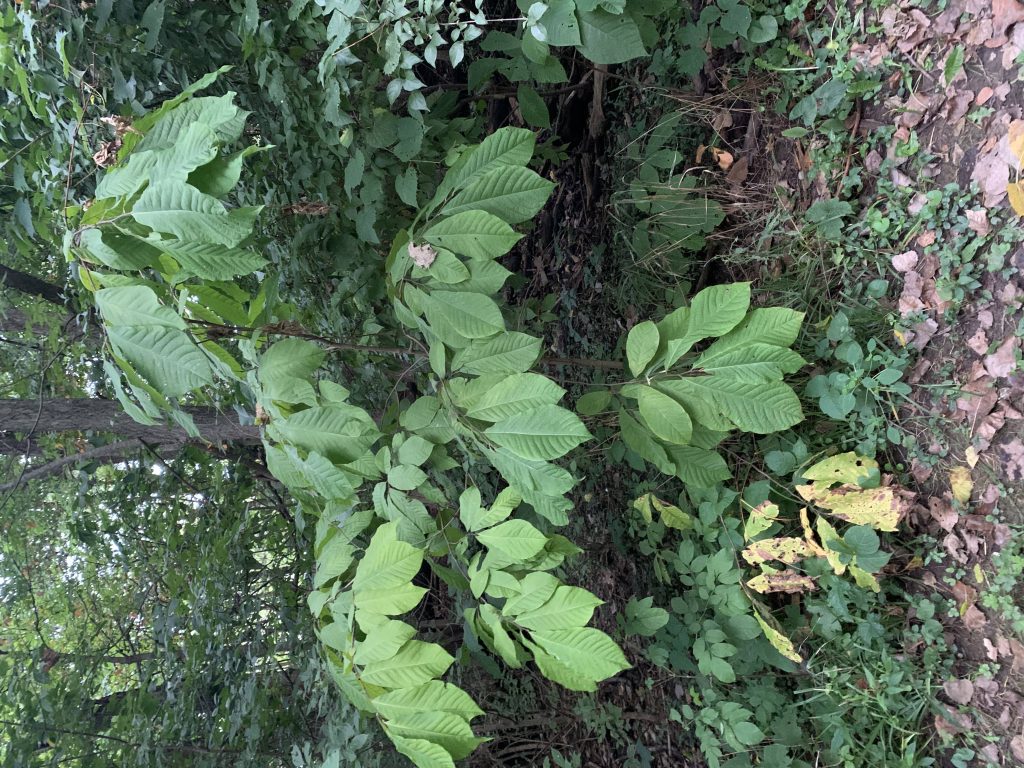 As I looked for facts related to this tree, part of me hoped their nomenclature was somehow related to the use of leaves as umbrellas because they’re just so huge. But, to my disappointment, they’re just named after their umbrella-like appearance and not for their functionality as umbrellas (from: https://www.uky.edu/hort/Umbrella-magnolia). An interesting note on the ecology of these trees: they are pollinated by beetles that feed on the flowers, according to the Ohio Department of Natural Resources (https://ohiodnr.gov/wps/portal/gov/odnr/discover-and-learn/plants-trees/flowering-plants/umbrella-magnolia1).

The American Sycamore has alternate, simple leaves with three to five lobes that are generally wider than they are long and resemble maple leaves in shape. The tops of the leaves are a medium green, and the bottoms are a little paler and sometimes wooly. The bark is smooth, and the bark peels off in random, irregular patches to reveal a white and yellow-ish underbark. 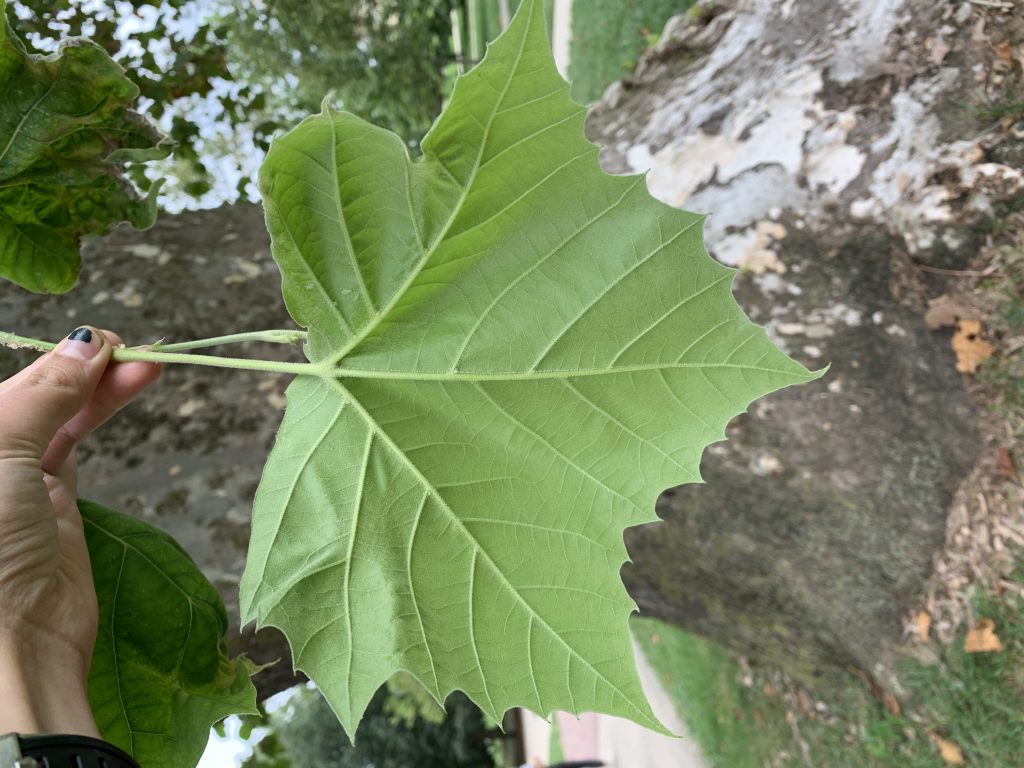 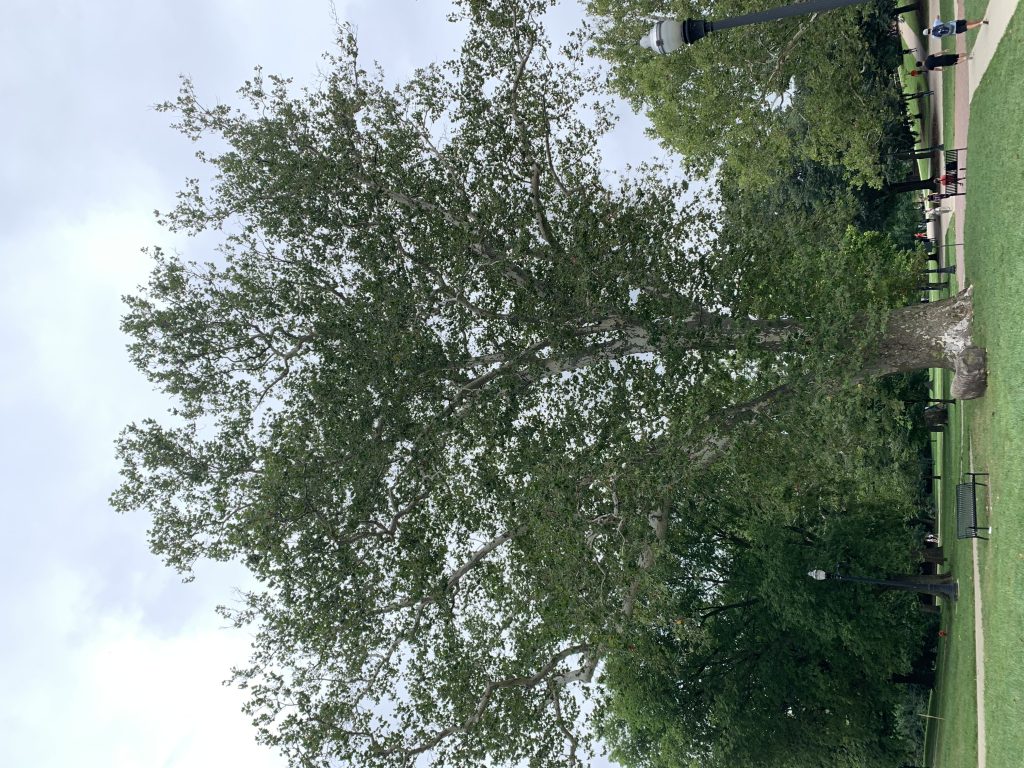 According to the Peterson Field Guide to Trees and Shrubs, the American Sycamore reaches the largest size of any tree in the Ohio and Mississippi river basins. That’s pretty cool.

Continuing my search for trees on the South Oval, I found this Tulip-Tree, Liriodendron tulipifera, next to the Ohio Union. Tulip-Trees, along with the American Sycamore, are another one of the first trees I learned to recognize, mainly from the interesting and unique shape of the leaf. I think it looks like an upside down hand, but my dad thinks they look like sports jerseys. Hey, to each their own, I guess.

The Tulip-Tree, again like the American Sycamore, can be very tall. The leaves are alternately arranged and simple with four notched-tip lobes. The leaves are often a greenish- yellow. The namesake of the tree, it has large, tulip-like orange and green flowers from May to June. Additionally, the petioles are flanked by two corky “wings” called stipules. 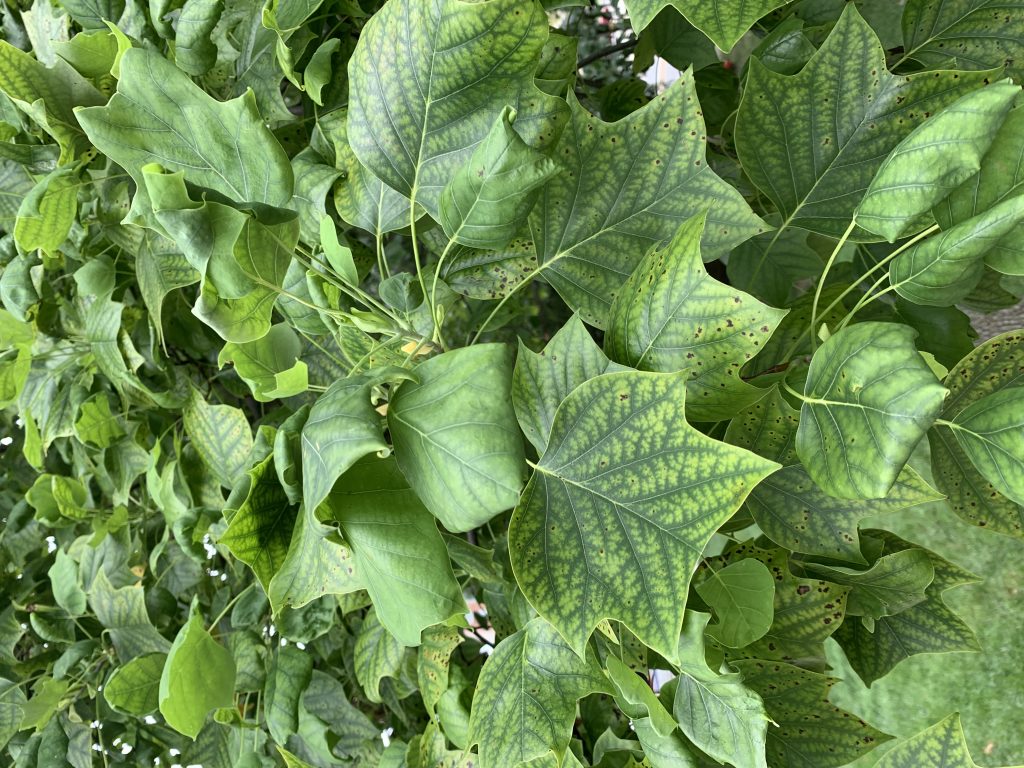 The Peterson Field Guide to Trees and Shrubs calls the Tulip-Tree the “handsomest eastern forest tree,” and I have to say, I agree.

The Tulip-Tree is also commonly known by the name of Tulip Poplar as well as the canoe tree due to its historic use by Indigenous Tribes, specifically the Cherokee, to make dugout canoes. The trunks are tall and straight, which lend well to the formation of canoes (https://www.uky.edu/hort/Tulip-Poplar). Additionally, the Cherokee used the Tulip Tree medicinally to treat, “parasitic worms, diarrhea, coughs, rheumatism, gastrointestinal distress, fever, and snake bites.” Additionally, a bark infusion was used on skin irritations and to treat broken bones. These facts and more on the cultural uses of the Tulip Tree can be found here: https://www.nps.gov/articles/000/inside-the-collections-hocu-6262.htm.

Growing up, my dad and I, every weekend, went on a walk at the park by my house, Bur Oak, and I credit that place with being one of the places that sparked my lifelong love of the outdoors. Before I had a clue what a Bur Oak tree looked like, I recognized its name. Now that I’ve finally learned to recognize its leaves, I was delighted to find this tree in front of the Ohio Union.

The Bur Oak is also known as the Mossycup Oak and by the scientific name of Quercus macrocarpa.

To identify the Bur Oak, find the alternately arranged simple leaves. Their leaves are lobed with smooth edges and bristle-less tips, and leaves are usually found to have one deep indentation near the base of the leaf. Their acorns are covered by a frilly, “burry” cap, for which the tree takes its name. 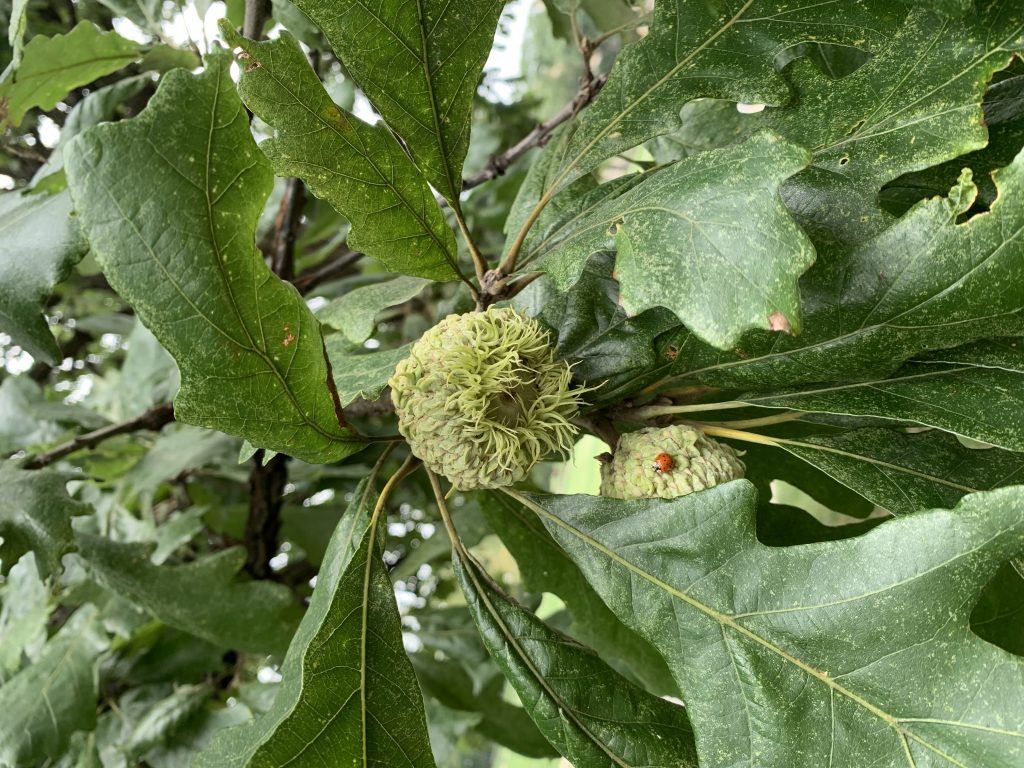 Like the Silver Maple and many other native North American trees, the Bur Oak was used by Indigenous Peoples for many medicinal uses. While, quite disappointingly, the Illinois State Museum does not credit specific tribes, its website details that Indigenous tribes used Bur Oak to treat “heart ailments, diarrhea, broken bones, and as an astringent (to close bleeding wounds)” http://www.museum.state.il.us/muslink/forest/htmls/trees/Q-macrocarpa.html).

The Coffeetree, Gymnocladus dioicus, also known as the Kentucky Coffeetree, is a member of the bean family and is related to locust trees, redbud, and wisteria. Ironically, according to the Nebraska Forest Service, the “National Champion” tree isn’t in Kentucky, but is actually a resident of Ohio (go bucks!) standing at 92 feet tall with a 77 foot canopy (found at: https://nfs.unl.edu/CommunityForestry/Trees/Coffeetree.pdf). That’s a pretty darn big tree, I’d say.

The Kentucky Coffeetree can be identified by its alternate, bipinnately compound leaves, which describe pinnate leaflets coming off of a pinnate leaf, giving the leaves a feathery appearance. The leaflets are very numerous with smooth, entire edges. Additionally, these trees have large, thick flat pods that are 3-8 inches long and have a yellow-green color

This particular Coffeetree was found in the middle of the South Oval of Ohio State’s Campus. If anyone wants to make a nice hot beverage with the pods, let me know and I’ll point you to it– more on that later. 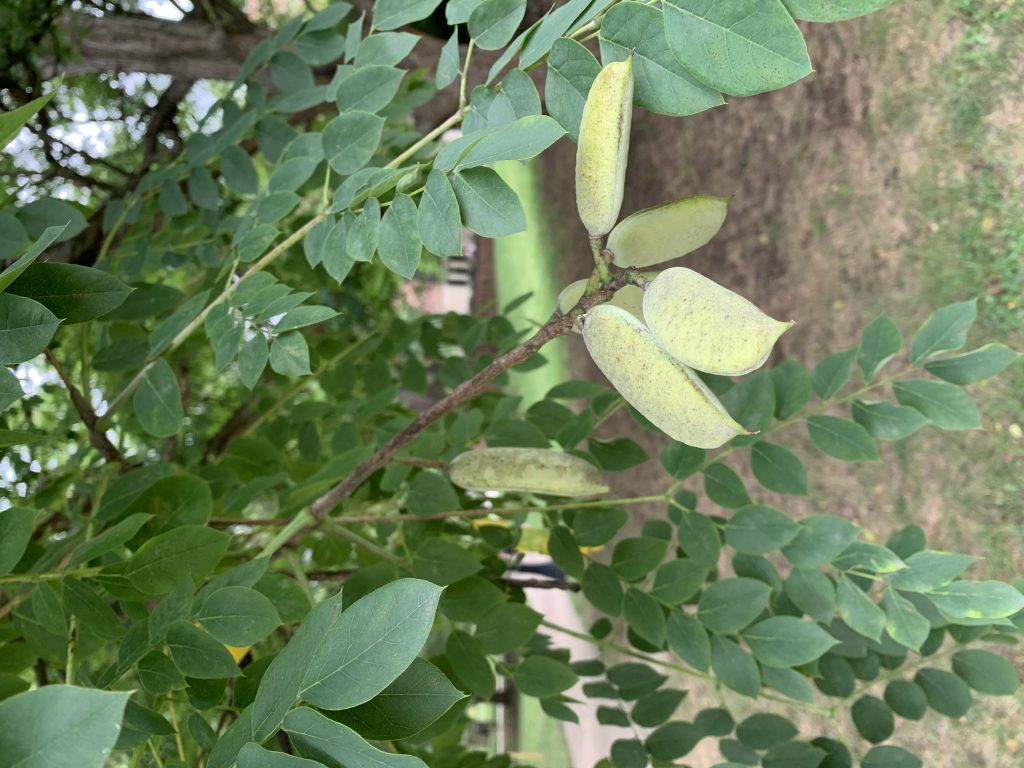 Living up to its name, the roasted seeds from this tree can be brewed to make a nice, hot beverage. Additionally, the Omaha tribe of the Great Lakes Region utilized the root covering to prevent hemorrhage (specifically in nosebleeds and childbirth), kidney failure, headaches, and fever. Aside from its medicinal and food uses, the beans of the Coffeetree were used to play a type of dice-and-bowl game so widespread that it was found in nearly every Indigenous culture pre-colonialism, according to VanNatta in his 2009 Article “Ecological Importance of Native American Culture to the Kentucky Coffee Tree (Gymnocladus dioicus)” (found here: https://www.uwsp.edu/forestry/stujournals/documents/na/avannatta.pdf).

For our last stop on this tour of native Ohio trees, quite fittingly, is the Ohio Buckeye, Aesculus glabra. This specific tree, appropriately, was found on the Ohio State University campus near the Mirror Lake Amphitheater.

The Ohio Buckeye, as previously mentioned in the Silver Maple section, fits into the MAD BUCK group of trees and can be quickly identified by its opposite, palmately compound leaves. Luckily for me, I was able to find this particular Ohio Buckeye tree with fruit on it. This tree can be identified using the fruit, at this point in the year with large, yellow-green ovular fruits with weak thorns covering the surface. 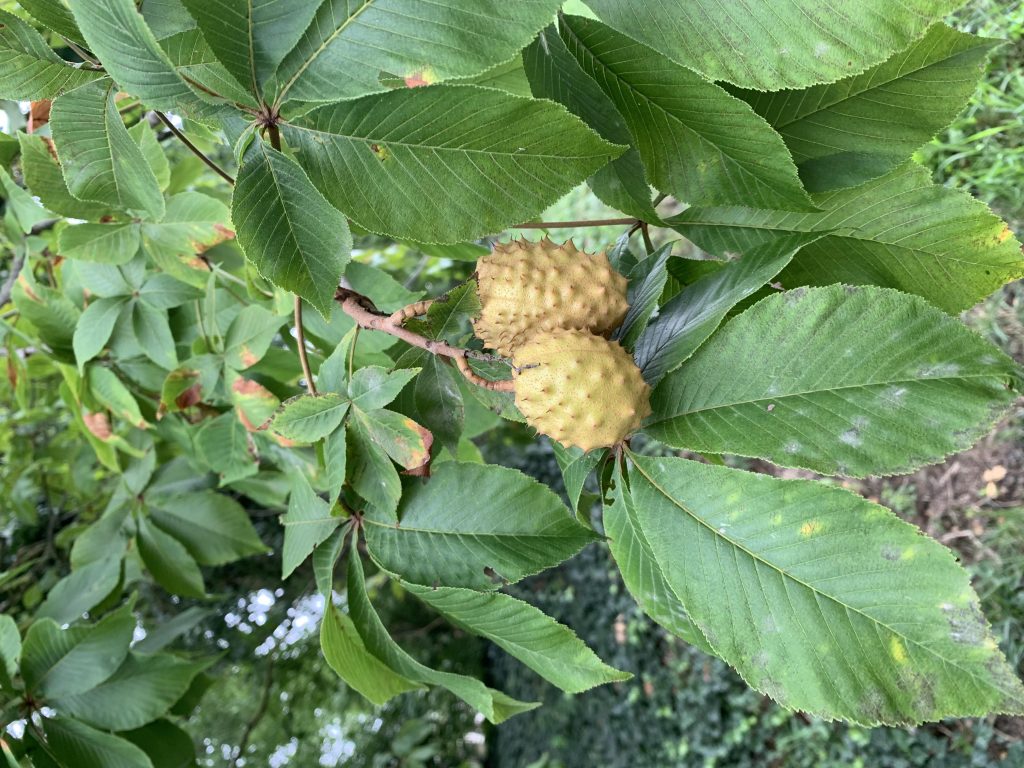 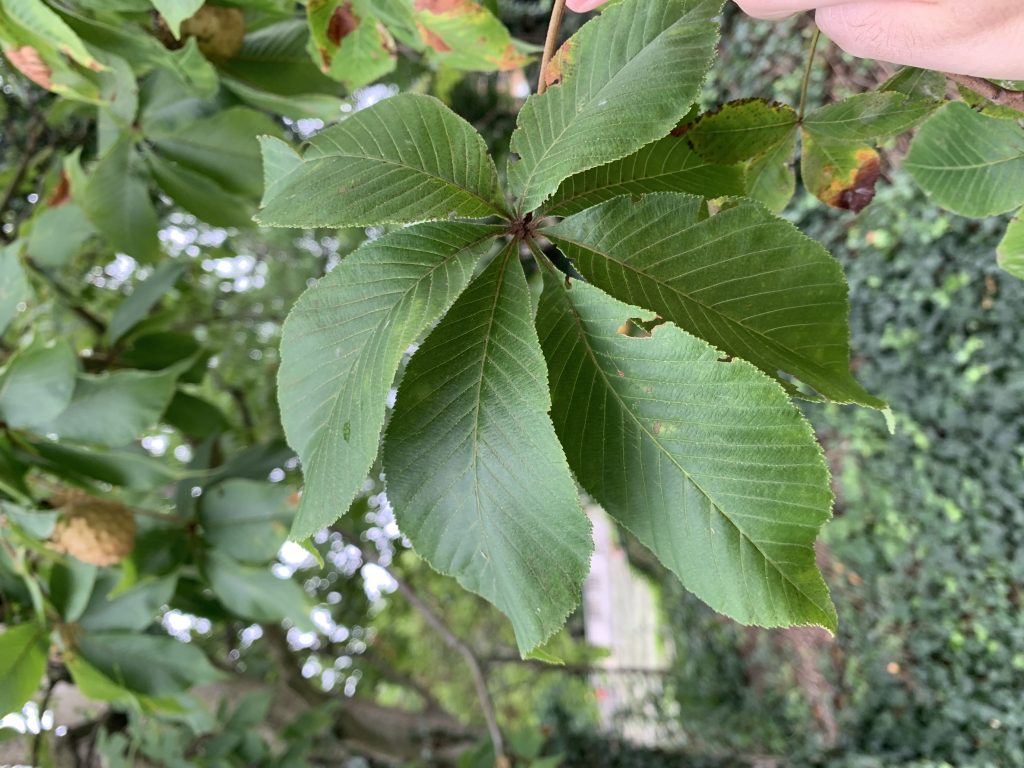 According to the Ohio Division of Wildlife Trees of Ohio Field Guide, the buckeye tree is named for the appearance of the nut; it apparently resembles the eye of a buck deer. For most of us, the buckeye leaf instantly makes us think of Ohio State. For me, it makes me think of game days and wearing a chunky necklace of buckeye nuts that inevitably comes loose in the stands and lets buckeye nuts loose all over the stadium. Ah, what fond memories.

That concludes my journey through tree identification. Thank you for joining me.